What is the Endocannabinoid System?

All of us have several different systems operating internally. They are constantly regulating our physical and mental processes. Throughout your entire body, different systems send signals using different chemicals, causing immeasurable results. CB1 and CB2 receptors use endocannabinoids, like anandamide and 2-AG, to regulate different functions that scientists are now only beginning to explore.

THC is a cannabinoid that just happens to work almost as well as the endocannabinoids our body produces. The endocannabinoid system is the most pervasive, diffused, and important modulatory system (a foundation for cognitive function) in the brain because it controls the release of pretty much every neurotransmitter. One neuron sends a message to the next by releasing neurotransmitters, such as dopamine or serotonin, into a gap that separates one neuron from the next. The gap is called the synapse. cannabinoids function like a “dimmer switch” for presynaptic neurons, limiting the amount of neurotransmitter, like dopamine, that gets released, which in turn affects how messages are sent and received. 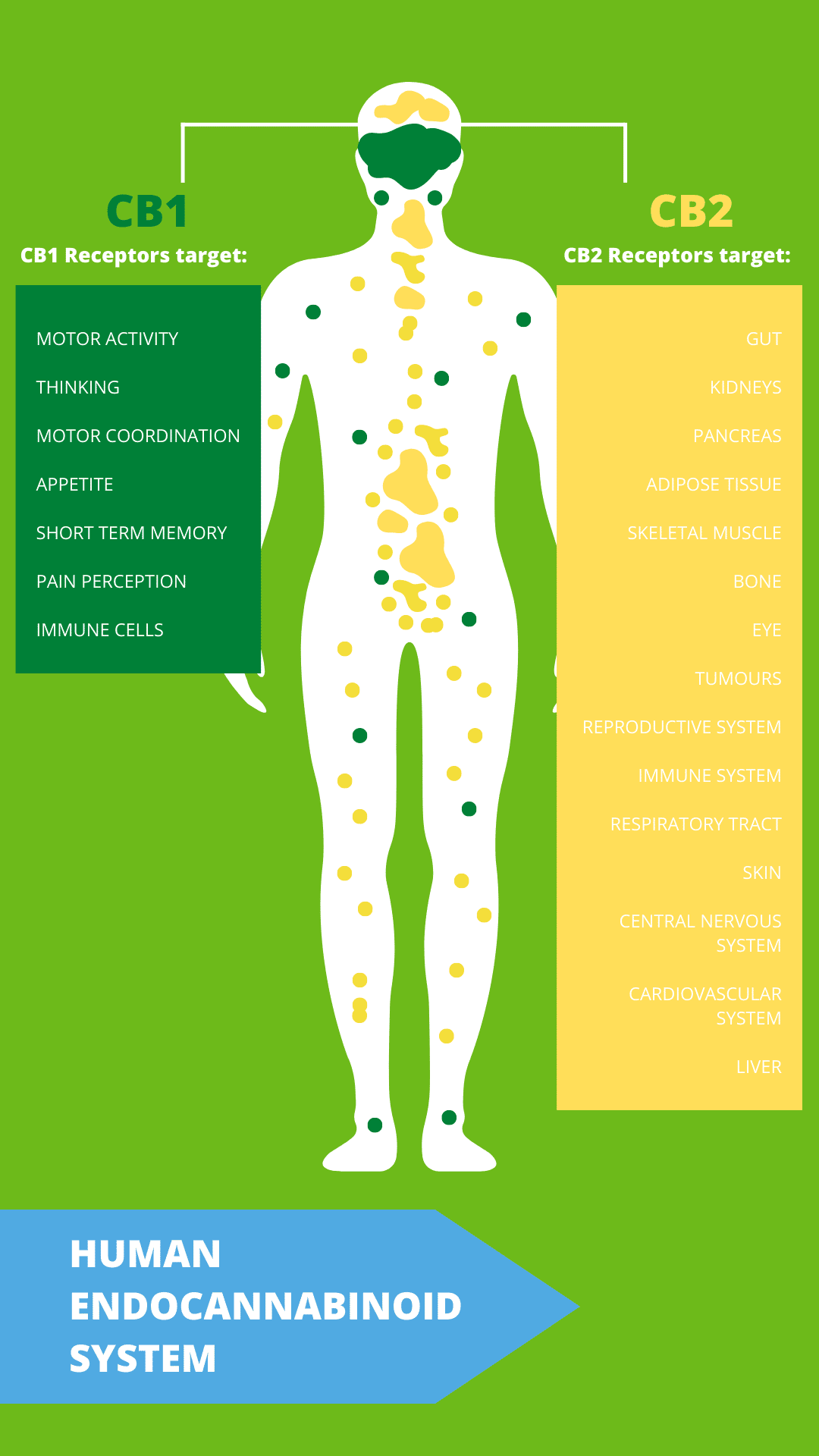 The cannabinoids in cannabis are appropriate for use as a natural supplement to support, strengthen, and boost the endocannabinoid system.

All humans are different, and that is especially true of their endocannabinoid system. The effect you experience from cannabis is just as controlled by your body chemistry as they are the kind of cannabis you are consuming. So, it is next to impossible to predict exactly how the cannabis you choose to consume will affect you.

Regular and extensive use of cannabis causes your body to eventually get used to it. You’ll need to use more to arrive at the same effects. This is what it means to develop a tolerance. Using cannabis frequently causes less activity at the cell receptors, so if you use cannabis heavily, you will not get as high as those who use cannabis occasionally.

Another way that cannabis might affect a person depends on what other substances they have in their system. For example, someone may have been drinking alcohol and then light up a joint. In this situation, they are likely to feel more intoxicated than if they had used weed alone.

Probably the best way to reset your ability to get high is to take a break. Cannabinoid receptor activity increases after just a few days of abstinence.

Learn more by exploring our helpful and informative blogs. You can also buy top-quality marijuana from our online dispensary all over Canada. It’s easy to get the best cannabis products in Canada to arrive discreetly at your door in every province. For any order of $150 or more, we’ll ship it free. If you’re a first-time customer, we’ll give you 3.5 grams of flower with your first order. Contact Ganjagrams for cheap AAAA weed online in Canada.